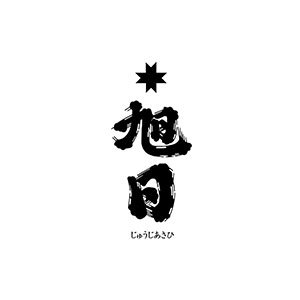 In 1907 (Meiji era 40), when the Emperor Taisho, who was then ruling the Eastern Palace, went on a tour in the San-in region. He presented a bottle of sake to his chamberlain, the Marquis Takamasa Kido, which was praised as “the most beautiful sake under the sky”. In addition, the seventh-generation head of the family was a great believer in Mt. Myoken, and he treasured the emblem of “Kiritake Yawase Cross”. Later, these two emblems were combined to form the “ Juji Asahi ＋旭日“ (which means + Rising Sun) emblem, which is still being used today.

The brewery is situated in Izumo, the city in Shimane Prefecture for as long as 150 years. Izumo is uniquely blessed by magnificent nature and had nurtured a brewing culture since the ancient period. Our sake is brewed with the rice grown in the mountain and pure water originated from the Kitayama Mountains. We seek to produce sake with a charm that only this brewery in the land of Izumo can produce.